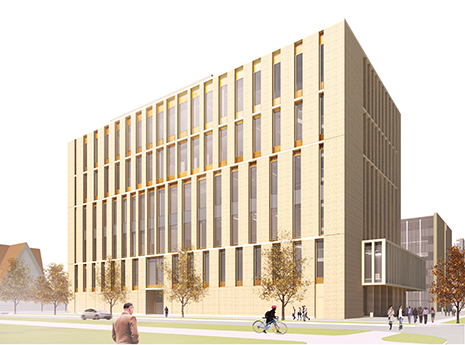 Montgomery Sisam Principal, Daniel Ling was in Fredericton yesterday for the public unveiling of the new Fredericton Courthouse design. The new, state-of-the-art courthouse will be the first purpose-built facility of its kind erected in the city in over 100 years.

The courthouse is an integral part of the Centennial Building Redevelopment project, which includes renovations to the former government office building. Its design includes main level secure parking for the judiciary; a secure detention area, a sheriff’s suite; 11 courtrooms and two hearing rooms for the Provincial Court, Court of Queens Bench and Courts of Appeal. It also features various court services, a law library and a barristers’ area.

At 32 metres high, the courthouse will become the tallest building in the downtown core and form part of an important civic district that includes the Provincial Legislature and Beaverbrook Art Gallery. The building will also contribute to an important transition between the city’s urban core and neighbouring residential district.

This project is being completed in collaboration with Courthouse Design Expert, Julian Jaffary and local firm Goguen Architecture.

To read about the unveiling >