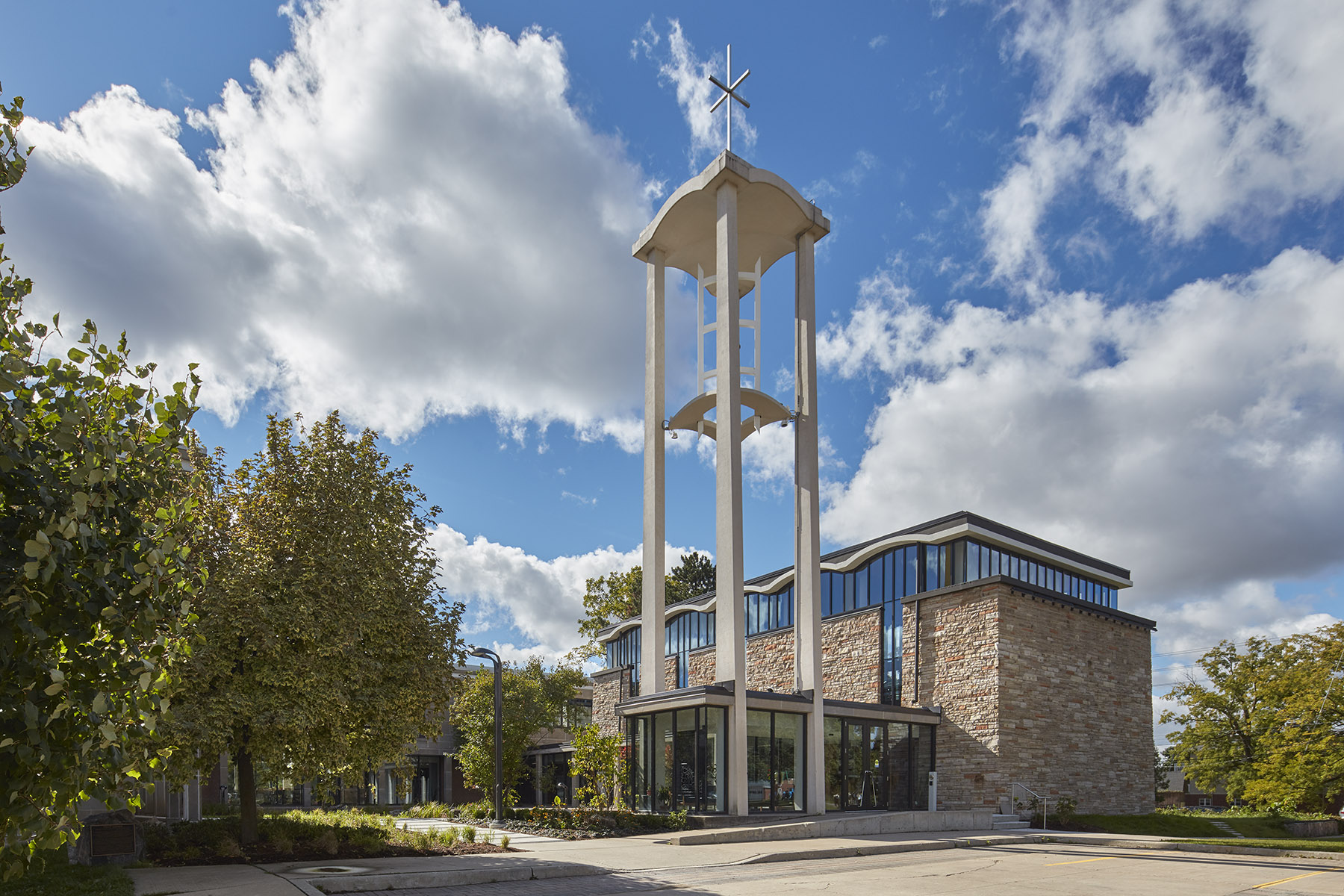 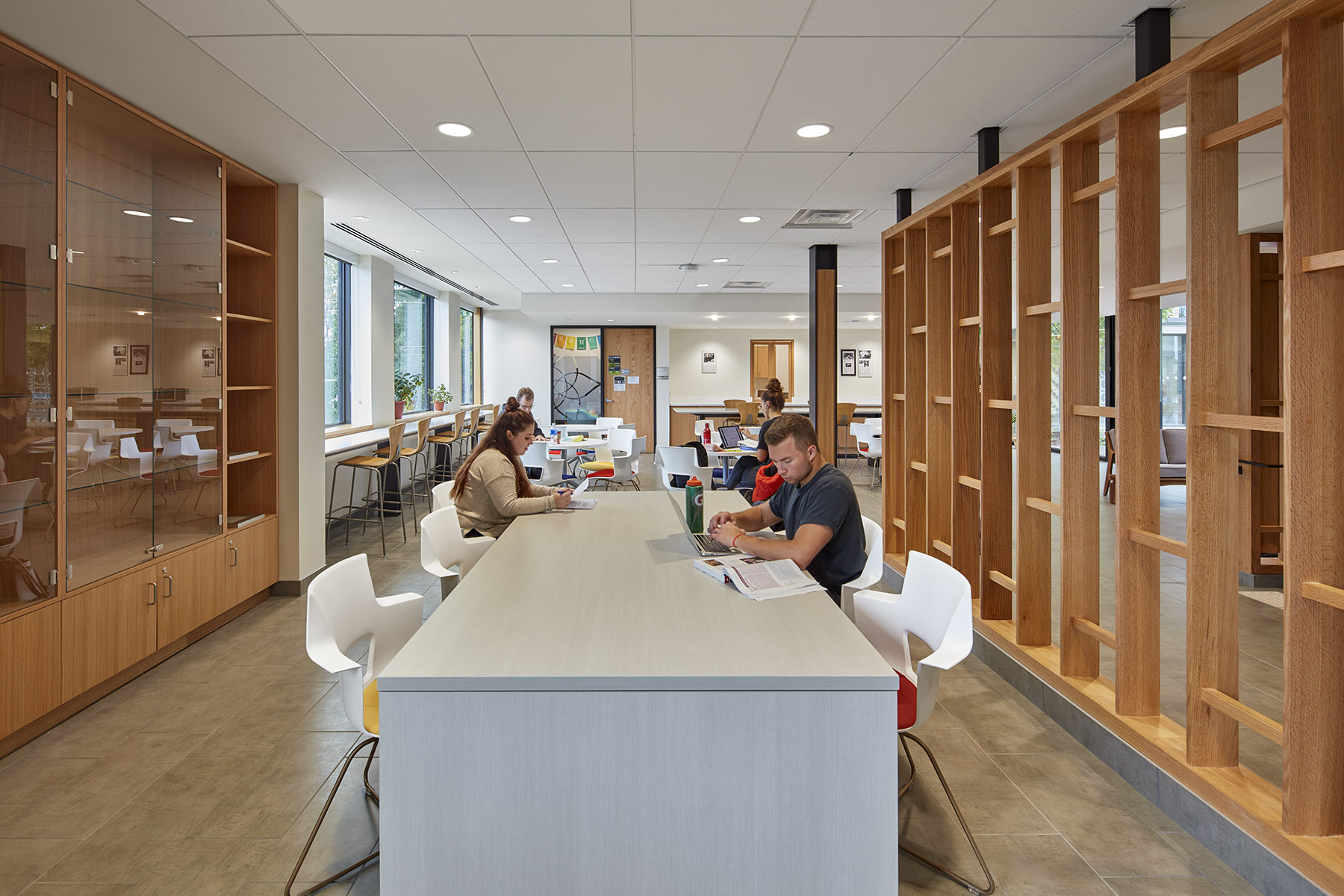 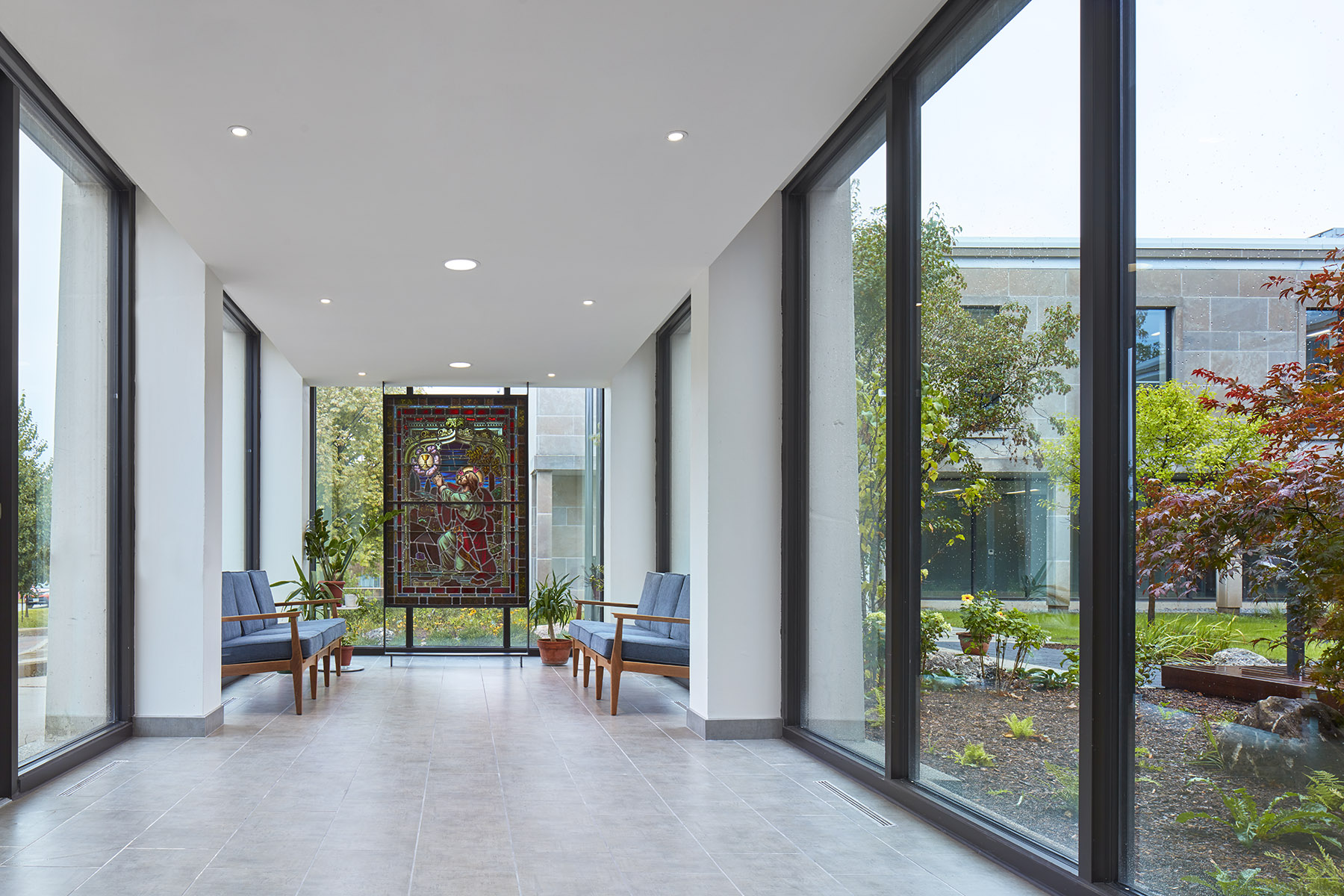 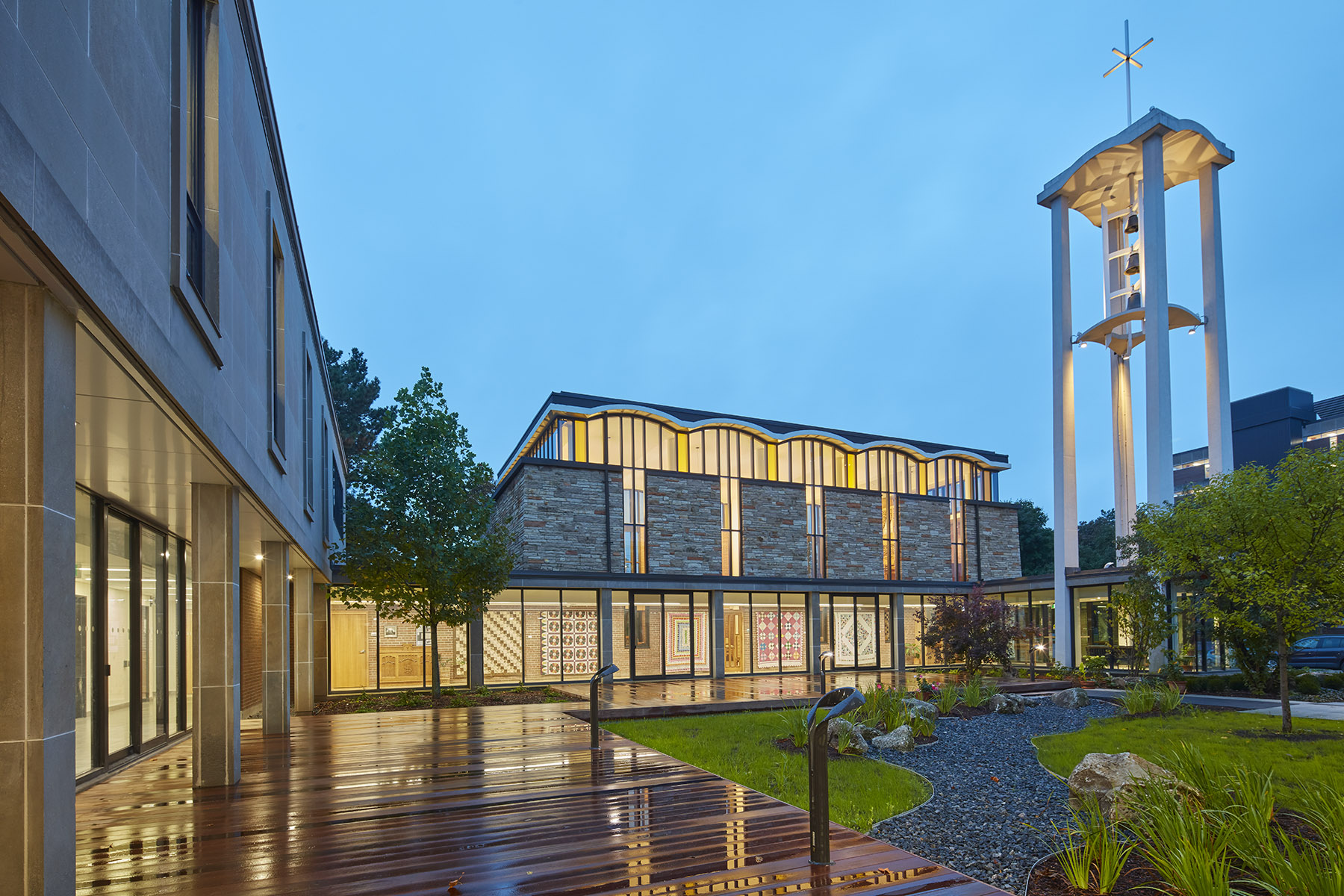 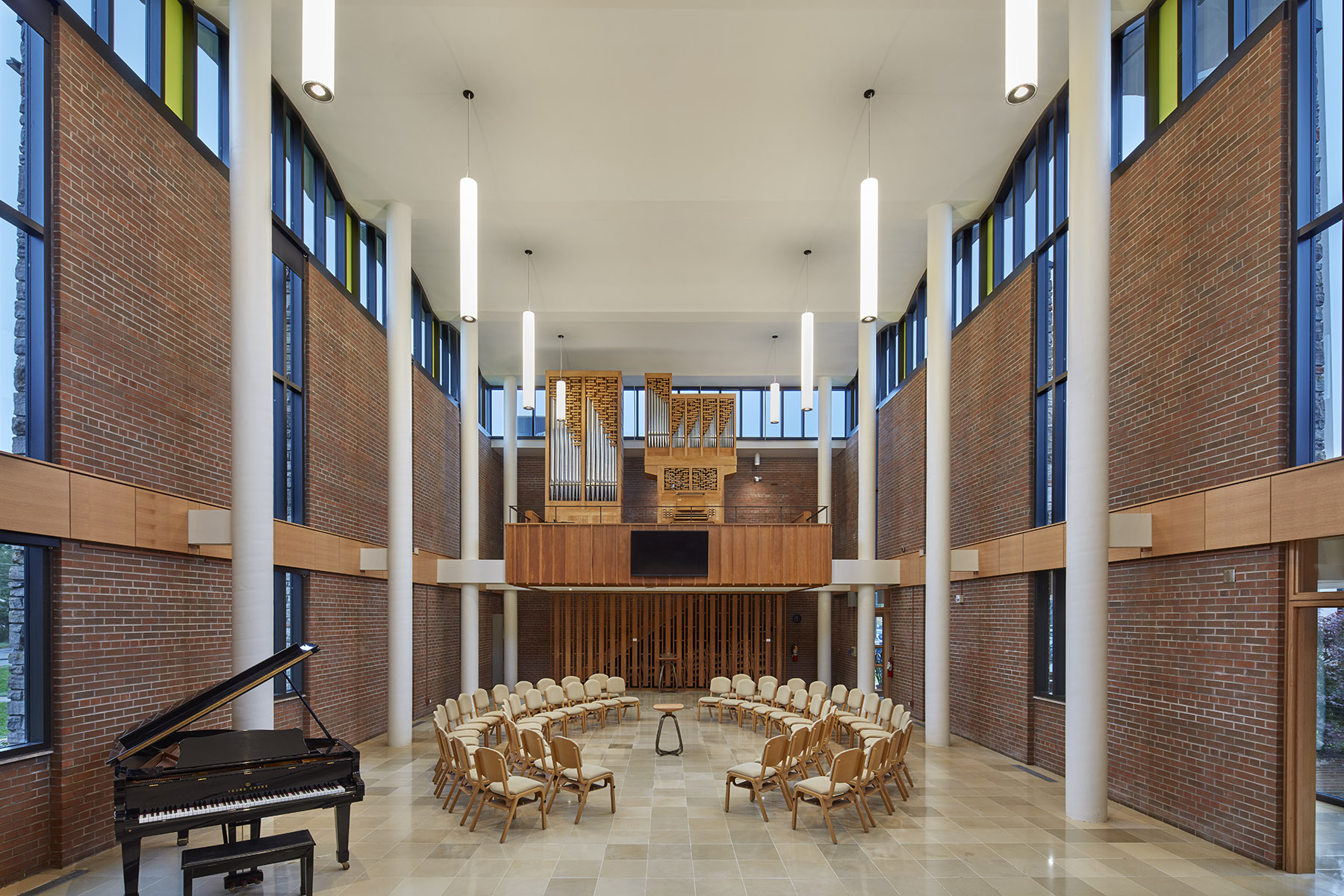 When Waterloo’s Martin Luther University College decided to renovate in 2015, the design process presented the theological school with the perfect opportunity to reaffirm its commitment to interfaith education and assert its evolving identity as an institution.

In keeping with the fundamental principles of both design and theology, the process all began with asking the right questions.

How does an established institution redefine itself for a contemporary world?

Over the next several decades, the Seminary grew and diversified its offerings until 1973, when it was provincialized and renamed Wilfred Laurier University. At that time, the Seminary became a federated institution of the University. With the launch of the new Pastoral Care and Councillor Program in the 1970s, the Seminary began to attract a wider swath of students from different faith traditions. By the 1990s, the number of students in the Master of Divinity program was dropping, while enrollment in what is now known as the Spiritual Care and Psychotherapy Program was on the rise.

Caught between modern secularism and post-modern liberalism, the Seminary was struggling to find its place in this contemporary post-secondary context. And it watched as students across the wider University, some who identified with a particular faith and others who did not, wrestled with what it meant to be human in their personal and professional lives. The future, its leaders conceived, lay not in denying change nor in abandoning Lutheran tradition but rather, in offering a broader-based theological education.

For nearly two decades now, the Seminary has no longer considered itself solely a denominational school. Today, it continues to move forward into interfaith education, instituting a number of new programs at both the undergraduate and graduate level. The newly branded Martin Luther University College (colloquially known as ‘Luther’) now has more than 32 faith traditions represented across its increasingly diverse student body.

How does an established institution reconcile tradition and innovation?

Among Luther’s greatest impediments to fulfilling its broadened new mission was the mid-century modern building it called home. The former Seminary had moved into the building in the mid 1960s, but, given the rapid pace of social change, by the late 70s it already seemed outdated.

Designed by notable local architects, Kruschen + Daley, the limestone-clad structure is, to this day, a beautiful and beloved campus landmark. It was conceived, however, in true cloistral fashion as an insular building, facing in on itself rather than out to the community. Inside, its Christian inferences were freighted with centuries-old traditions. Its aging infrastructure, moreover, could hardly keep pace with new teaching modalities, let alone support Luther in its continuing efforts to grow and diversify its programs, people and outreach initiatives.

Fortunately, Kruschen + Daley’s modernist interpretation of the monastic typology was strong, sound and, in its simplicity, easy to adapt. It also had many enduring qualities. The challenge lay in having the conviction to honour what the building was, and the symbols and traditions that once defined it, but also the courage to do everything necessary to bring the building into a contemporary, multi-faith context.

How does an interfaith school champion both inclusion and individuality?

Luther understood that, first and foremost, the newly renovated building should respond to the needs of all users and impart a sense of belonging regardless of different backgrounds, faith traditions or lived experiences. The Chapel, of course, was the heart of the old Seminary. With its high windows, marble floors and rich acoustic quality, it was a highly desirable space. It was also the most tradition-laden room in the building.

A new openness of spirit was achieved by restoring the material quality that gave richness to the original space. Certain art pieces, symbols and icons that clearly defined the space as Christian were removed. Some worship furnishings were commissioned, and these, like the chapel itself, were made beautiful, but plain, leaving visitors to craft their own associations. They were also mobile, allowing the space to be restructured as needed.

These decisions may have been subtle, but they were profound in making the Chapel accessible to and comfortable for a more diverse community. The Chapel remains undoubtedly a sacred space, but it has become a canvas for people to import their own spiritual interpretations.

The addition of a new gathering space was equally important. In this faith-based school, it is the hallmark of inclusion and openness. Together with the new ablution facilities,
the gathering space represents the constantly changing character of the community that Luther serves.

Seemingly trivial perhaps, adding single unit washrooms has also helped to create a more inclusive environment. In its original iteration, the Seminary had men’s only facilities; this reinforced a unidimensional definition of gender. The new single unit washrooms are emblematic of the increasing prevalence of gender issues amongst the student population. They signal Luther’s shift in its understanding of gender as well as the realities of the community within.

And while this renovation project was largely focused on the interior of the building, the design also included a modest but highly impactful addition to redefine the entrance of the building and open it up to the street. Luther is no longer the introspective place it once was. Commensurate with its broader focus on community, outreach and engagement, Luther now presents a welcoming face to the neighbourhood and the many students, members and local organizations who seek to explore and express their faith within.

How does a contemporary theological school address the anxiety that inevitably comes with turning away from tradition?

Luther also knew that transforming this institution, from a solely Christian community to a multifaith one, would ask a lot of people who were steeped in the traditions of the organization and or deeply invested in preserving the heritage of the building.

To honour the architectural heritage of the building and respect its religious roots, the design team was careful to identify and preserve those details – often small, sometimes fine – that resonated with all occupants. The team looked for ways to reuse or enhance them in way that would elevate the quality of the space. For example:

The natural materials – the coveted limestone exterior and rich wood – remained untouched, as did the melodic bells, whose habitual ring was conspicuously absent during the renovation.

The quality and quantity of daylight was preserved in the corridors by maintaining the integrity of the courtyard. Study bars were added to allow students to take advantage of this compelling feature. Lighting was enhanced in the chapel by replacing the yellow clerestory windows with clear ones.

Hardware, like the door handles, were also retained. The wrapped aluminum, pleasant to the touch, is a characteristic feature of mid-century design. In and of itself this may seem insignificant, but for those with a deep relationship with the building, it had a big impact.

Most of the furniture was also retained. While some new pieces were added, they were carefully curated to complement those that had been preserved.

Finally, the Chapel’s distinguishing wood screens were replicated for use in other parts of the building. Together with the new panels of frosted glass, they help honour some of the most iconic features of the original design.

Finally, in planning its new home, Luther recognized that the newly renovated building would be instrumental in nudging its members towards greater understanding and respect for each other’s differences. This was foundational to Luther’s vision, particularly given the global context in which it was now squarely operating and the magnitude of problems society is facing today.
This vision was implicitly expressed in a number of ways:

Classrooms were redesigned to support subject-centred learning. With a freer, more malleable classroom structure, students can engage in robust dialogue, and learning happens in conversation with one another.

The Courtyard, around which the plan perambulated was enhanced with generous decking. This hallmark of the cloister typology that had, for many years, become an afterthought in the day-to-day function of the building, now invites formal and informal gatherings.

How does an interfaith school encourage its students, staff and other members of its community to engage, share and learn from one another?

The new multifaith gathering space was purposefully juxtaposed with classrooms, offices, the courtyard, the chapel, and a series of new, casual learning spaces to increase opportunities for students, faculty and community groups (both social and faith-based) to come together.

Public space was created within the existing footprint not only to invite people to stay but also facilitate spontaneous social exchange and comradery between occupants.

As a result of the new design, everything at Luther now happens side by side. This fosters conversation, creates connection, and nurtures fellowship. And it reinforces the interconnection between faith, life and learning.

So, what did we learn?

As institutions age, they become vulnerable. Their long-held policies and practices, established in a different time to meet different needs, may not work as well as they once did. Traditional institutions, particularly small ones, need to innovate to keep pace with change. This means identifying opportunities, confronting current limitations, and daring to explore uncharted territory.

The recently renovated Martin Luther University College is an unassailable example of the capacity for design, not only as an outcome but as a process, to strengthen our convictions, reinforce evolving values, and propel us forward without losing site of the past. This process doesn’t have to be about big, imposing gestures; it is often about nuances and subtleties, about asking the right questions and teasing out priorities.

Emerging from thoughtful deliberation around a host of decisions is design that reveals the innate qualities of what was, while giving shape and life to a new mission and vision. The tenor of the building may have shifted but its heart endures.